France's Tessa Worley speeds down the course on her way to set the fastest time during the first run of an alpine ski, women's World Cup giant slalom, in Semmering, Austria, Tuesday, Dec. 28, 2010. (AP Photo/Marco Trovati) 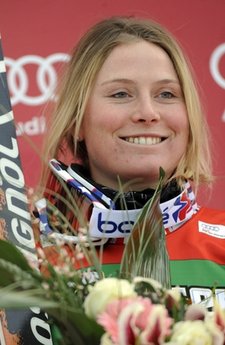 ALPINE SKI WORLD CUP. SEMMERING, Austria – Tessa Worley clearly didn’t weigh herself down with holiday treats last weekend. The 21-year-old French racer won her third straight World Cup giant slalom on Tuesday, putting down an early lead in the first run in Semmering then going on to win with a total time of 2 minutes, 9.66 seconds.

Maria Riesch matched her best ever GS result, finishing second, 0.62 seconds off the lead pace as her teammate Kathrin Hoelzl rounded out the podium, 0.78 seconds back, for her third podium finish in GS this season. 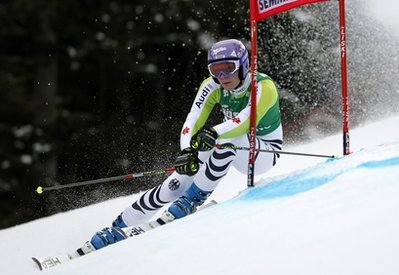 “I really can’t believe what I’m doing right now,” said Worley, who also won the last World Cup giant slalom race in St. Moritz and the one before it in Aspen. “I’m just so happy for the moment. Three is so above what I expected. I’m just really, really happy.”

A GS specialist, previous to this season, Worley had just two World Cup podiums – both wins – in Aspen in 2008 and Are in 2009. When asked what accounts for her consistent success this season, Worley said she has learned how to ski solidly without mistakes.

“I think my skiing is more stable so I can do whatever I want without many mistakes,” she said. “I’m going to keep going, I’m just going to try to keep going and we will see what comes next.”

As for a New Year’s resolution, Worley doesn’t have much to change.

“I think if I’m starting the year like I finished this one it would be nice,” she said.

In her previous two wins, Worley had to come back from a deficit after the first run but on Tuesday, she was ahead of the field all day. She finished the first run 0.18 seconds ahead of Tina Maze with Riesch 0.49 seconds back and Hoelzl 0.60 back.

The second run proved exhilarating for several racers, beginning with Olympic GS champion Viktoria Rebensburg, who, after making a big mistake that almost took her off the course in the first run, came into run No. 2 in 28th place with 2.42 seconds to make up. She did an honorable job of it, blasting into the lead and holding it for nearly half the race to end up ninth.

“I had a really big technical mistake and I tried to push in the second run,” said Rebensburg, who, like Hoelzl came into Tuesday’s race feeling very ill with back pain and flu symptoms. “My teammates are sick too, so maybe I got it from them. My back is hurting and I’m not feeling great so it wasn’t a perfect day for me but I’m pleased with the second run.”

Stirring a deafening ripple of cheers through the Austrian crowd, Elisabeth Goergl, fifth after the first run, charged the second run and finished in the lead but was bumped to fourth after Worley, Riesch and Hoelzl.

Hoelzl felt so ill she missed the bib draw on Monday night and was planning on going to the doctor Tuesday afternoon. She was surprised she managed to ski so well and land on the podium.

“I’m quite satisfied with the result,” Hoelzl said through a translator. “Last night I was ill, I couldn’t attend the draw, before the race I had problems with my back so it was surprising. I didn’t think before the race that I could start but we have a good physio team and I had some painkillers. There wasn’t too much power in my first run, I was surprised when I crossed the finish line and saw the result. There was a big amount of motivation for the second run.”

Riesch is one member of the German team who appeared to be quite healthy on Tuesday. With her second place finish, she regains the lead in the World Cup overall standings with 658 points over Lindsey Vonn, who was seventh on Tuesday and now trails in the overall with 617 points. Besides a 19th place in St. Moritz, Riesch has landed in the top 10 in the last eight GS races, including her first GS podium in Maribor last year and a third at World Cup finals in her hometown of Garmisch-Partenkirchen. 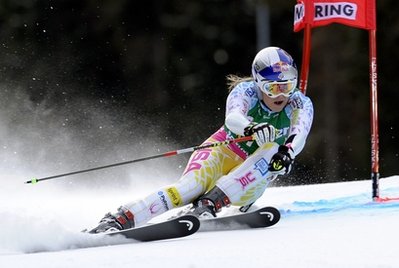 When asked if she was disappointed in not coming away with her first GS victory Tuesday, Riesch said absolutely not. She is pleased to be back on her racing game. After her tremendous early season of five podiums including two wins, she had a handful of less-than-optimal results before Christmas (19th in the St. Moritz GS, 24th in the Val d’Isere downhill and a DNF after straddling a gate in last week’s slalom in Courchevel).

“I’m just happy about the second place,” Riesch said on Tuesday. “Sixth tenths is a lot of distance to first place. For second place you always have to be happy. I know how it is when you’re fighting hard. Second place is very satisfying. The start of the season was great for me. Just before Christmas I had three or four races which were not so good. So it was not a problem to go for Christmas holiday and start with new motivation. You can come back strong. I’m really proud of it.”

Maze ended up sixth after a couple slips in her second run while local favorite Kathrin Zettel was eighth and Switzerland’s Fabienne Suter 10th.