SNOWBOARD WORLD CUP. Ekaterina Tudegesheva (RUS) and Benjamin Karl (AUT) have won the New Year’s first World Cup competition on the Bucheben slope right in the heart of Bad Gastein, Austria. The two Parallel World Cup leaders thus not only underlined their exceptional position in the LG Snowboard FIS World Cup’s race disciplines but also will travel as top favourites for World Championships Gold to the up-coming major event taking place in La Molina, Spain from January 15th till 22nd. Today’s ladies podium was rounded out by Austrian’s Marion Kreiner and Claudia Riegler as second and third respectively. Isabella Laboeck from Germany finished fourth. On the men’s side, Aaron March (ITA) and Simon Schoch (SUI) took the podium spots right next to Karl with Rok Marguc from Slovenia placing fourth. 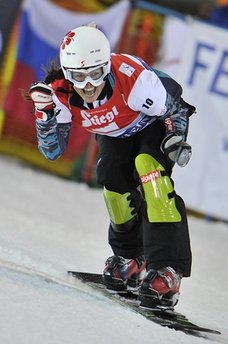 According to the win by Benjamin Karl and the podium results of Kreiner and Riegler the national team of 14 riders provided a perfect wrap up of the 18 World Cup competitions ever to be held in Bad Gastein which celebrated its tenth anniversary as World Cup host this weekend. It also was the 2009 Parallel Slalom World Champion’s career’s tenth victory, however the first one on home turf.

“Finally, I know what winning really is all about,” the 2010 Olympic runner-up said right after his triumph on the 240 metres long course. “Winning in your home country is the best thing an athlete can experience. It’s amazing. It`s unbelievable to celebrate together with your fans and friends from home. It was a very good race.” 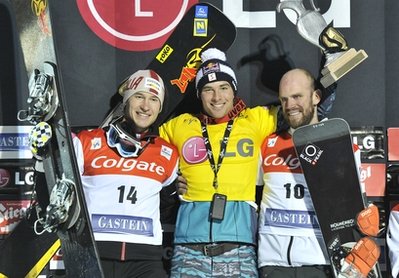 A final statement which Ekaterina Tudegesheva could also have had said as the current dominating lady of the race board circuit drew a similar line: “A New Year, a new victory. It feels so good.” But asked for their roles as main aspirants for the title at the World Championships the 23-years-old rider from Tashtagol came to a totally different conclusion than Karl. While Tudegesheva kept it modest (“The Worlds are something completely different and have nothing to do with the World Cup. So, I don’t feel any special pressure.”), it was “Big Ben” who confidently put his main goal in a nutshell.

“For sure I want to win the title. However, the focus will be on the parallel giant slalom as I haven’t won this Gold medal yet. But it was the same for 2009 and then I ended up winning the parallel slalom,” the 25-years-old from Wilhelmsburg stated. “My shape has been getting better from race to race and I reckon I’m on the top level right now. And I also have proven already that I can handle the pressure. Actually, I do better under pressure,” the rider from Lower Austria added. 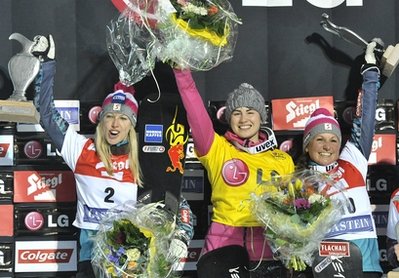 The LG Snowboard FIS World Cup continues in the USA. On January 26th, the season’s third big air contest is scheduled in Denver, CO. It’s the first time, that Denver hosts a World Cup event. During the World Cup break, the world’s best battle for WCS medals in La Molina, Spain, as the 9th FIS Snowboard World Championships will last from January 15th till 22nd.