11,000 enthusiastic spectators at soldout Bergisel Stadium experience another boost in the level of snowboarding with the first ever Cab 1440 Double Cork stomped in a contest

SNOWBOARD. Innsbruck, February 5, 2011 - The winner of the Billabong Air & Style Innsbruck-Tirol 2011 is Mark McMorris from Canada. In the 4 man Super Final in front of 11,000 spectators at the soldout Bergisel Stadium he conquered first place with a Cab 1260 Double Cork and 94 points over Peetu Piroiinen (2nd/88.67 points) and Austrian Werner Stock (3rd/83.67 points) and surprise finalist Nils Arvidsson (4th/24.67 points) Andrew Hourmont, founder of the Air & Style: ĄIt is hard to believe but the riders pushed the riding level even further compared to last year and also the Air & Style in Beijing. Once again snowboarding history was written at the Air & Style. Thanks to the riders, the bands and the crowd for a thrilling evening.ď

Winner of both the Air & Style Beijing 2010 and this year´s X-Games, Sebastien Toutant (CAN) was beaten in the first round by Sage Kotsenburg (USA), who stomped the first ever Cab 1440 Double Cork in a contest.. Last year´s winner Marko Grilc (SLO) was beaten in Round 2 by Nils Arvidsson (SWE). With the second place Peetu Piroiinen took over the lead in the TTR World Tour Ranking. 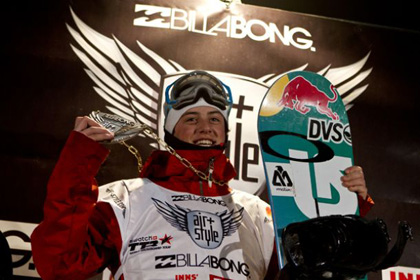 Torgeir Bergrem from Norway won the Rookie Challenge ahead of Swiss rider Patrick Burgener, both claiming a spot with the Top 16 in the main contest. British rider Jamie Nicholls finished third in the rookie contest.

The enthusiastic fans had a snowboard fest with electric Air & Style atmosphere with music from top DJs and live acts from Pennywise and Jan Delay.

Innsbruck, Austria Ė February 5th, 2011: The 11,000 screaming spectators at the Bergisel Stadium saw a veritable spectacle when the 6Star Billabong Air & Style took over the ski-jump stadium with a gigantic straight jump and 16 of the world's best snowboarders. The exciting headto-head format saw rider by rider get knocked out until there was the final showdown between four riders in the super-final. The winner, Canadian Mark McMorris, took home a large part of the 75.000 ą prize purse, as well as, the well respected ďAir & Style Ring of GloryĒ, leaving Finlandís Peetu Piiroinen in second place and local superstar Werni Stock in third. With his result today, Peetu reclaimed the Swatch TTR World Tour lead and is heading with speed for a third consecutive TTR World Tour Champion Title, which will be determined at the 6Star Burton US Open in March.

Billabong Air & Style Saw Progressive Tricks Thrown Down With Style The atmosphere was electric when rider after rider took their three runs flying over the huge straight jump, in order to determine who would remain to compete in the super-final. Mark McMorris made his way to victory by knocking out Finnish shredder, Markus Malin, in the first round with a stylish Cab 1260 double cork. In the second round he edged out Sage Kotsenburg, who in the first round had thrown down a first in competition history, a Cab 1440 double cork, knocking out Canadian Sebastien Toutant. In the super final, on his last run, Mark stomped a stylish Backside 1260 double cork, which moved him ahead of Peetu Piiroinen.

Peetu was stoked on his second place and is looking forward to a tight battle for the 10/11 Swatch TTR Tour Champion Title: ďThis event exceeded all my expectations, I would not have thought I could make top three as I have had a small injury with my rib. I got good TTR points today and being number one at this point is great. My toughest competitors to watch out for are definitely Seb Toots, Iouri Podladtchikov and Mark McMorris.Ē Local favourite Werni Stock got huge cheers from the crowd for his Switch Backside 1260, which landed him third place in the super-finals just ahead of Nils Arvidsson (SWE) who finished in fourth place.

The day started off with the Air & Style ďRookie ChallengeĒ, and with an exception this year due to some injuries in the main event rider list, two of the top rookies where rushed straight to the top to compete against the invited riders in the main event. The rookies were eager to use this opportunity and threw down some impressive tricks. Up-and-coming Norwegian rider, Torgeir Bergrem, took the first spot with a massive Cab 1260 and Swiss youngster, Patrick Burgener, qualified in second. Last year's Rookie Challenge winner, Seppe Smits (BEL), landed a Cab 1440 on his first ever try, but it was not enough to knock out Peetu Piiroinen in the second round.
Full Speed Ahead on the TTR Tour On the other side of the world, the 5Star Burton Canadian Open wrapped up today with Kelly Clark (USA) and Kohei Kudo (JAP) taking the halfpipe honours and Jamie Anderson (USA) and Sam Hulbert (USA) nailing the slopestyle titles. With many changes in the rankings, the chase for the Swatch TTR Tour Champion title is heating up and next up is the 6Star Nike 6.0 Air & Style in Munich, Germany. The Air & Style Munich will fill another stadium with superstars and eager fans on February 12th at the Olympic Stadium. Watch the live webcast on freecaster.com and ttrwordltour.com starting at 16.30 GMT. Another major European event going next week is the 20-year anniversary celebration for the 5Star Nescafé CHAMPS Leysin in Switzerland, which will take place February 8th to 13th 2011. Keep up to date on all the Swatch TTR Action by keeping
your eyes glued to www.ttrworldtour.com