FREESTYLE SKIING. Saturday, the fifth and final day of the 2011 Jon Olsson Invitational in Are, Sweden. After enjoying the sunshine, doing some yoga and taking a dip in the lake, the day kicked off with an autograph session at the Åre square, where kids and parents alike lined up to get their posters, helmets and skis signed by some of the best freeskiers in the world. 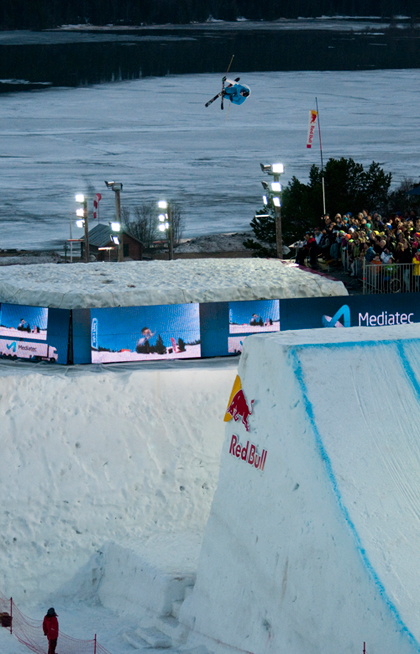 Ole Christian Mustad getting his name out there

After putting down their fancy signatures it was time for the riders to trade flip-flops for ski boots and head over to the jump. The training session started off mellow, but as soon as Russ Henshaw put down his triple cork 1440 again the tricks went from 7's and 9's to switch double 10's and 12's. Unfortunately McRae Williams hurt his knee after getting stuck in the slushy snow on one of his landings and didn't trust it enough to ride in finals. PC Fosse got unlucky too, as he hit his head and walked away with a little concussion. 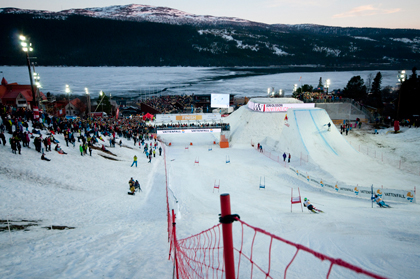 Finals started at 8 p.m. and the crowd was more than ready for some action. After the riders were introduced it was time to kick things off. The format of the night consisted of four rounds, with each round giving the riders one jump and five riders getting knocked out. To keep the action going for the audience, the Vattenfall Alpine Challenge filled in the time gaps while the riders went back to the top of the in run.

After training and qualifications yesterday, expectations were high and the riders didn't disappoint. In the third round, Elias Ambühl threw down the first triple cork 1440 of the competition and quickly raised the bar.

In the end, the final round consisted off Russ Henshaw, Elias Ambühl, Ole Christian Mustad, Andreas Håtveit and Alex Schlopy, during which each of them were given three runs to amaze the crowd with their big bag of tricks.

Alex Schlopyís first attempt at a triple cork ever ended up being a triple cork 1980 to hip check. The host of the night Luke Van Valin put it best by saying, "I think I have to get my calculator out for this one." Even though he walked away, Alex decided not to go for his last run in finals and risk the chance of making things worse. And as expected, Russ Henshaw pulled out the triple cork 1440 again, but was unable to get his last rotation around in time to land on his feet. 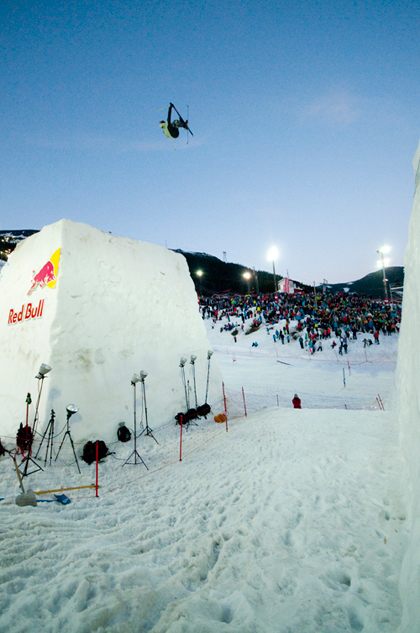 Russ Henshaw seconds before crashing on his triple cork 1440

Andreas Håtveit kept it to doubles throughout the night and scored himself third place with a perfectly landed double cork 1080.

Video qualifier Ole Christian Mustad surprised everyone by putting a massive and clean double cork 1260 to his feet to take home second place.

But the event belonged to Elias Ambühl, who stomped a triple cork 1440 on all of his final runs and made them a little more perfect every time, taking home another big win.

That's all from Åre, Sweden at the Jon Olsson Invitational. Congratulations to Elias, and a big thanks to Jon Olsson and his hard working team for putting on another amazing event!