FIS. The 48th International Ski Congress in Kangwonland (KOR) from 27th May 2012 has been the first FIS Congress in Asia. More than 760 delegates representing the extended global ski family have enjoyed the great hospitality of their hosts, the Korea Ski Association and the Kangwonland Hotel as part of the High1 Resort, during the entire Congress Week. 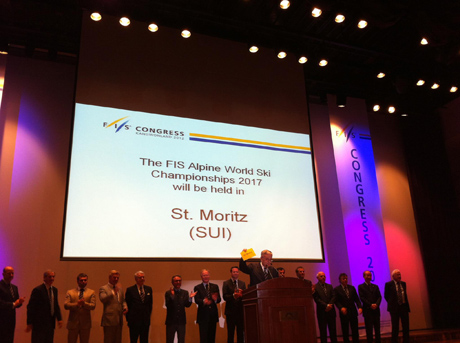 The following were elected to the FIS Council for the upcoming two-year period, 2012-2014:

In order to enable even greater promotion of its events, the FIS Congress adopted a revision of the so-called Rule 208 dealing with the "Exploitation of Electronic Media Rights." The intention of the rule change is to ensure that the technological changes in the distribution of information are better reflected in the regulations.

The rules now identify the conditions under which short extracts can be distributed in terms of their duration, time embargo and appropriate financial conditions, taking account of the platform that is used be it television, mobile devices or the Internet. The interests of the rights owner and producer of the material are protected and financial responsibilities are clarified.

The FIS Congress 2012 also adopted criteria defining for eligibility of the Members of the FIS Council that set out the qualifications to run and hold a position in the FIS Council.

As part of the statutory business the Congress approved the accounts and reports of the auditors as well as the budget for the next two year period 2012-2013. It welcomed the proposal of the Council to distribute CHF 8 million from the result of the financial period 2010-11, along with an additional 2 million from the FIS reserves to the National Ski Associations for the promotion of skiing. Together with the budgeted amount of CHF 10 million in National Ski Association support for 2012-13, a total of 20 million CHF will be paid out over the next two years from FIS to the member Associations.

The FIS Council has confirmed the calendars for the Audi FIS Ski World Cup season 2012/13 in its meeting on Thursday 31st May 2012 at the FIS Congress in Kangwonland (KOR).†

The season will begin as has become a tradition with the Glacier Opening in Sölden (AUT), now scheduled for 27-28th October 2012. The season then continues traditionally with the Slalom Opening in Levi and the North American events including the Speed Opening for both ladies and men. The men's Italian tour in December will see the return of Madonna di Campiglio with a slalom on 18th December 2012 whilst the ladies will be returning to St Anton (AUT) for speed events on 12th-13th January and to Meribel (FRA) for a downhill/super combined weekend on 23rd-24th February 2013. Two City Events are planned in the upcoming season, in Munich (GER) and Moscow (RUS), as are two super combined events for each gender.

The highlight of the 2012/13 season, the FIS Alpine World Ski Championships in Schladming (AUT), are scheduled from 5th-17th February 2013.

FIS Council on its meeting on Thursday 31st May confirmed the FIS Cross-Country World Cup calendar for the 2012/13 season. The coming winter will feature many highlights including the 7th edition of the FIS Tour de Ski and the FIS Nordic World Ski Championships in Val di Fiemme.

After one-year break world's best Cross-Country skiers will begin their quest for the crystal globes in Gällivare. After the inaugural weekend in Sweden there will be time for the traditional Nordic Openining in Kuusamo where all three Nordic disciplines meet for the first time the coming season.

Having the Scandinavian mission behind, the FIS Cross-Country World Cup will travel overseas to Canada for competitions in Quebec and Canmore. Quebec will host free technique team sprint and individual free sprint whereas Canmore will organize mass start distance competitions in classical technique, free technique sprint. The skiathlon in Canmore on 16th December will conclude the pre-Christmas competition period.

Due to the title event in the 2012/13 season, seven competitions in nine days are scheduled for the seventh edition of the FIS Tour de Ski. The Tour will kick off on 29th December with a free technique prologue in Oberhof, Germany. As a second stage, a pursuit will be held in the Thuringia Forest. For the first time in FIS Tour de Ski history a stage will be held in Switzerland. Swiss Cross-Counry skiing fans will have a chance to cheer on Dario Cologna on his home soil in Münstertal in the free technique sprint on 1st January.

After the second rest day, the Tour will continue in Toblach on 3rd January with the distance competitions for the ladies and the A to B stage from Cortina to Toblach for the men followed with a short individual start competition in classical technique. The FIS Tour de Ski will traditionally conclude in Val die Fiemme with a mass start race on 5th and the Final Climb on 6th January.

The first weekend after the FIS Tour de Ski is traditionally reserved for sprint specialists and the FIS Cross-Country World Cup will make its stop in Liberec. World class Nordic Skiing action stays in the Northern part of the Czech Republic, as the city of Liberec will be hosting FIS Junior and U23 World Ski Championships from 20th to 27th January 2013.

La Clusaz, France is on the competition schedule the following weekend with classical mass start competitions and relays. 2012/13 season will be an important milestone on the road to Sochi as the Pre-Olympic FIS Cross-Country World Cup takes place from 1st to 3rd February. The host of the 2014 Winter Olympic Games will organize three competitions, free technique on Friday, skiathlon on Saturday and classical technique team sprint on Sunday.

The highlight of the 2012/13 season, FIS Nordic World Ski Championships in Val di Fiemme is scheduled from 20th February to 3rd March.

The season will conclude in Scandinavia with well-established program featuring Lahti, Drammen, Oslo and the World Cup Final in Sweden with Stockholm and Falun as host venues.

The ski jumping calendars for the upcoming summer and winter were now officially confirmed by the FIS Council at the FIS congress in South Korea.
†
FISskijumping.com
30.05.2012 16:39

As part of FIS's multi-year international campaign entitled "Bring Children to Snow" that has been designed to generate passion for snow activities among the younger generations, the Kangwonland Congress Week saw the recipients of the 2nd FIS SnowKidz Award honored. The top three award winners were decided from among the eight finalists. Altogether, 21 projects representing 21 National Ski Associations competed for the awards.

About FIS
FIS is the governing body for international skiing and snowboarding, founded in 1924 during the first Olympic Games in Chamonix, France. Recognized by the International Olympic Committee (IOC), FIS manages the Olympic disciplines of Alpine Skiing, Cross-Country Skiing, Ski Jumping, Nordic Combined, Freestyle Skiing and Snowboarding, including setting the international competition rules. Through its 115 member nations, more than 6'500 FIS ski and snowboard competitions are staged annually. Specific initiatives are undertaken by FIS to promote snow activities as a healthy leisure recreation, notably for the young.