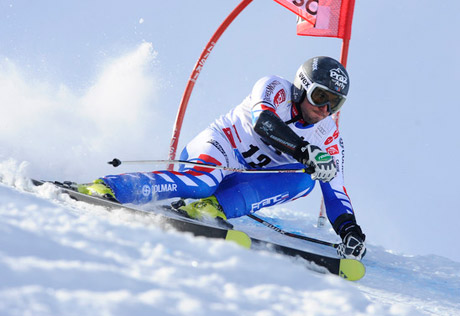 Marcel Hirscher was a solid yet distant 9th at 1,36 seconds while Norway’s Aksel Lund Svindal ended a far 14th – 1,57 seconds behind the leader.

2009 giant slalom World Champion Carlo Janka from Switzerland, also the reigning GS Olympic Champion, failed to qualify for the second run as he only set the 31st best time, a tenth behind the 30th Cyprien Richartd from France.

Also among the qualified racers is 22-year-old Adam Zampa, from Slovakia, the recent winner of the New Zealand Cup, who never managed to score any World Cup point in past seasons. So far Zampa has been racing since 2010 on the World Cup tour yet without qualifying for second runs in the 19 races he had entered so far. This morning he started in 40th position and ‘only’ lost 2,41 seconds on Fanara.

31-year-old Fanara, who already reached two World Cup podiums in his career on the challenging courses at Adelboden and Alta Badia, finished three times among the best 10 in recent years including last year when he took a promising 6th place. He had an average season afterwards a,d suffered a bad injury at his left shoulder crashing at Bansko, in Bulgaria, while fighting for a podium finish. He still managed to end the season with a promising 5th place at the Finals at Schladming before undergoing surgery in springtime.

“It’s great to ski that I have been skiing really well this morning but the most important will be to remain focused and determined this afternoon,” the Frenchman told the press. “I like this tough slope a lot, I just hope to course conditions will be fair later on,” the skier from Praz sur Arly added. “My skis went really well but I need more time than usual to fully recover from all my efforts in that first run.”

A very gifted athlete, the Fischer champion seems ready to fight hard for a great season start on the demanding Rettenbacher glacier. Yet he’ll need to ski at his best level to prevent Ligety to celebrate his second victory in a row here.

The reigning GS World Champion achieved a very solid first leg despite poor visibility and he is known for his very aggressive second runs. He said that he was basically pleased with his skiing and his equipment and ready to fight even harder in the afternoon.

The second run should start at 12.45 CET – weather permitting. It was quite foggy between the two runs when the top-30 qualified racers went through their course inspection.