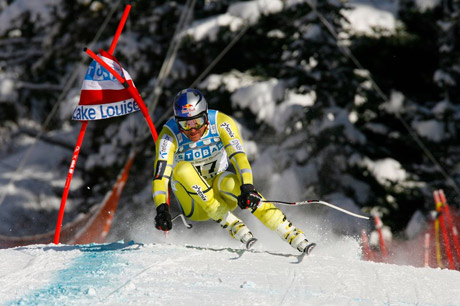 Aksel flying down the course in Lake Louise, photo: HEAD

The Norwegian skied a perfect run and with a time of 1 minute, 48.31 seconds left Max Franz, the winner of the first training 0.64 seconds behind.

Klaus Kroell was comfortably sitting in third place when Marco Sullivan made the crowd go wild with an outstanding run from bib 42. The American seemed almost surprised to how good his run was as it is not very common for a bib that high to make it on the podium. 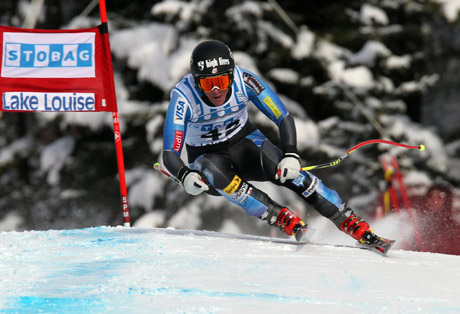 This is what a comeback looks like! Marco Sullivan charged from bib 42 to land back on the World Cup podium for the first time since 2009 with downhill third in Lake Louise to open the men's speed season. Marco Rocks! (Getty Images/Agence Zoom - Alexis Boichard)

Svindal is no stranger to the Lake Louise slope, he has won three super G races and just missed the top spot in a downhill at the Canadian resort, so winning today was a great satisfaction and gave him a great deal of confidence for the rest of the season.

“Every victory feels very good,” Aksel said.  “But at the beginning of the season, to be at the top in all training runs and then win the race is a great sign. I have won three SG here but never a DH so this is great. It proves that what I worked on this summer was good.”

Max Franz seemed unbeatable, as one after the other skiers were unable to match his time. But just before leaving the start gate, Svindal knew anything was possible.

“Conditions were changing, when at the start you cannot ignore what goes on in the finish area, everyone is talking about the results. I was not sure I could win starting towards the back, but I heard Erik Guay did well, starting just before me and I knew it was possible. I heard no one was able to beat Franz, but Erik did well and I knew I would have to attack all the way if I wanted to win.”

Franz has been on fire during the first training run, no one was able to beat him and today he enjoyed the leaderbox for a while when first his teammate Kroell got really close, finishing only 0.02 behind. Next to go was Svindal and Franz couldn’t stay still while watching the Norwegian. 15 minutes after leaving the leaderbox, the young Austrian, born in 1989 still had his hands shaking.

“I couldn’t stay still in the leaderbox while Kroell and Svindal were coming down, I was there from bib number 3 until Svindal with 22 and I wanted to keep staying there,” Franz said.

Lake Louise must have a special place in Sullivan’s heart, as it was here that back in 2007 he achieved his first downhill podium, finishing second to local hero Jan Hudec. Today’s result was the fourth podium for Sullivan, who can pride himself of a downhill victory in Chamonix 2008.

“Compared to every other podium I had this one has been long in the making,” a smiling Sullivan said. “I knew I had it in me but it took me 3 years to get on a podium again. I knew I was having a good run but I tried not to think about it and just enjoyed my run. It was really fun realizing how fast I was once the finish line was crossed. “

Klaus Kroell was safe in third when Sullivan matched his time; it’s something you don’t see too often in skiing.

“I was surprised, I didn’t really expect for someone to make it that close to the top from such a high number. I’m not disappointed to be sharing the spot with Marco, he did a great job,” Kroell said jokingly.

Just before Sullivan started, the race was on hold for some 20 minutes as Italian Mattia Casse slide into the nets on the section of the course called Fishnet. He suffered left shoulder injury and is transported to Banff for further evaluation. 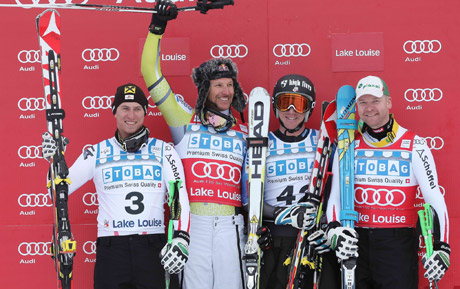 Sunday it’s super G time and for sure Lake Louise will once again put on an amazing show, stay tuned for more speed at 11.00 local time (19.00 CET).