SAN SICARIO, Italy (Reuters) - Michaela Dorfmeister won the one prize that has long eluded her with Olympic gold in the women's Alpine skiing downhill on Wednesday. 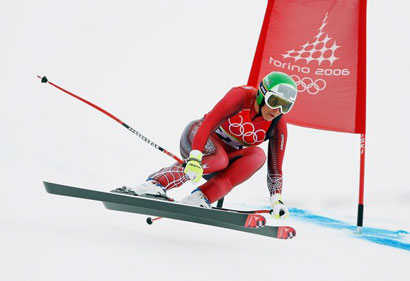 The 32-year-old Austrian World Cup and former world champion, who will retire next month, wept in the finish area as she realized she had won the first Olympic gold of her long and distinguished career.

"This was my last dream," Dorfmeister told reporters. "Now I will be able to retire with a perfect feeling and I can't wait to start a new life.

"I have been so nervous for the last two days. I couldn't sleep. My legs were so heavy at the start of the race, then I said to myself: 'Hey, let's go for it'." 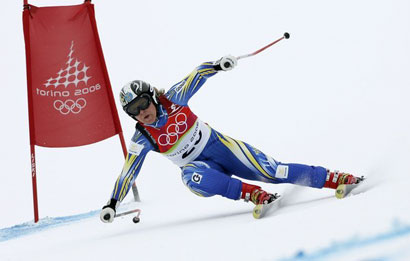 World champion Janica Kostelic of Croatia did not start the downhill because of a high pulse rate.

Defending Olympic champion Carole Montillet-Carles, of France, finished more than two seconds off the pace after suffering a bad crash in training on Monday.

Dorfmeister had made no secret of her ardent desire to fill the one gap in her trophy cabinet.

Twice a world champion in the speed events, overall World Cup champion in 2002 and four times a winner of season-long titles in the individual cups, she had never quite made the grade at Olympics.

In 1998, she took silver in the super-G, missing out to winner Picabo Street of the United States by an agonizing 0.01 seconds.

Four years ago, in Salt Lake City, the best she could do was fourth in giant slalom.

Dorfmeister's time of one minute 56.49 seconds down the 2.5-km Fraiteve piste on the first cloudy day of the Games was 0.37 seconds ahead of Olympic rookie Schild, who has never done better than fifth in a World Cup race. 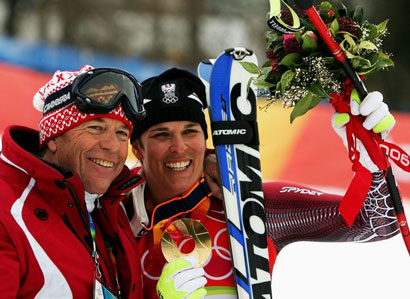 Schild, 23, is the granddaughter of the first women's downhill champion in Olympic history, Hedy Schlunegger, who won in 1948.

"I felt this was my course and my day," said Schild, who had set the fastest training time on the slope on Monday.

Paerson, who won giant slalom silver and slalom bronze at the 2002 Games, clocked 1:57.13 despite almost crashing halfway down the course.

The Swede is a relative newcomer to downhill and won her first race in the discipline just under a year ago.

"I come from a very small village with only small mountains and for us to get a medal in downhill was not even a dream three years ago," Paerson, who will be a favorite in every event here, told reporters.

"It is the same as getting an 'E' in an exam," said Goetschl who has two silver and two bronze medals from previous Olympics and world championships.

Lindsey Kildow took a late decision to race after being taken to hospital following a training crash on Monday. The American, who banged her head when she careered down the slope, finished joint eighth, 1.29 seconds behind Dorfmeister.

Kostelic pulled out of the event because of an irregular heartbeat that stems from a thyroid condition that has plagued the 24-year-old for most of her life.

She first came to prominence when she won four medals at the 2002 Winter Games, claiming golds in the giant slalom, slalom and combined and taking silver in the super-G.

It is uncertain whether Kostelic will be competing in the other events.

Kostelic was in Sestriere on Tuesday to watch her brother, Ivica, win the silver medal in the men's combined event.

SAUZE D'OULX, Italy (Ticker) - Australian Dale Begg-Smith did not suffer from a case of nerves in the biggest event of his life. 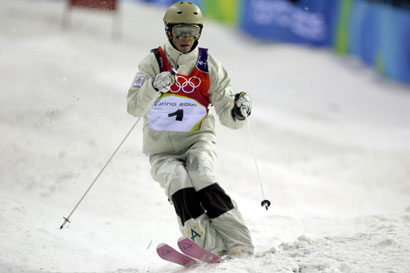 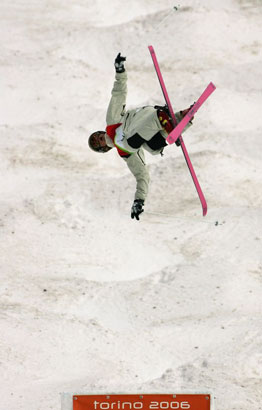 A native of Canada who runs a successful online marketing company in his spare time, Begg-Smith earned a score of 26.77 to edge Mikko Ronkainen of Finland, who received a mark of 26.62.

Toby Dawson of the United States, who was sixth in the qualifying earlier Wednesday, earned the bronze with a score of 26.30, besting Canadian Marc-Andre Moreau (25.62).

"It definitely wasn't my career run," the Korean-born Dawson said. "I knew I had to have a solid performance for a medal, but I wasn't able to quite do what I wanted to do. No one made mistakes."

"I've really been struggling," Dawson said. "I broke my leg, tore my ligaments and then broke my foot right after that. I still have the pin in my foot. I was just happy I was able to get my health back and compete at full fitness here at the Olympics." 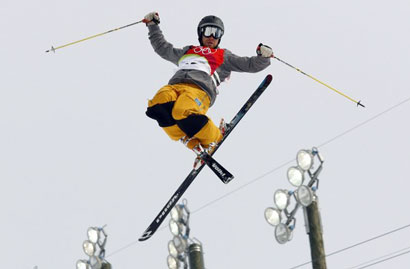 American Travis Cabral was second in qualifying but came in a disappointing ninth at 24.38.

"It wasn't the best run I've ever had, but I gave it my all," said Cabral, the 2003 World Cup moguls champion. "I knew to get on the podium, I would have needed the perfect run. One little mistake makes a big difference. On the bottom jump, I landed in a hole and split my legs. They (judges) catch that and it costs you.

"I've worked so hard to put down the run I just put down, it just didn't work out the way I would have liked. I've been working my whole life for this."

Countryman Jeremy Bloom, who won the World Cup last year and was fourth in qualifying, was sixth.

"I knew I made a little mistake, but I came here to accomplish my goal," Bloom said. "I didn't come here to win any certain color medals and I was so close. I'm happy with the way I skied and I'm happy with the experience I've had here. There's not too much to look down upon."

A former star punt returner at Colorado, Bloom will head from Italy to the NFL scouting combine in Indianapolis next week.

"It's good to have that right now and right ahead of me," Bloom said. "Most of these guys are taking it easy now, going out tonight. Maybe I won't be, though."

"I felt our guys skied great," U.S. coach Jeff Wintersteen said. "Travis Cabral and Jeremy made some small mistakes, but overall, they skied great. Dale was phenomenal tonight, he was flawless, and that's hard to beat. Overall, I'm pleased with how our boys skied."

PRAGELATO, Italy (AP) -- The Norwegians thought they had a chance to get back in the Nordic combined team event had their health improved in time.

But in a surprising move, event judges on Wednesday decided to restart the postponed event in the second round of the jumping portion after saying earlier that both rounds would be scrapped and new entrants would be accepted.

This was bad news for reigning world champion Norway, a medal contender that pulled out Tuesday because its athletes were ill. The initial ruling Wednesday to postpone the competition because of high winds would have given the Norwegians extra time to recover, a chance to get back on the start list and another shot.

But now they won't be able to compete after all, unless the competition were to be postponed a second time Thursday.

"They decided to run the competition and it doesn't matter for us because three of the guys are still sick, so we couldn't start anyway," Moen said. "Maybe they'll have to postpone it until Saturday or Sunday and then our guys are ready to compete. We had a good start in the Olympics and have one medal. Now we are focusing on the last event -- the sprint on Tuesday next week -- and hope everyone is ready to compete."

Swirling winds cut short Wednesday's action halfway through the jumping portion, and competitors were scheduled to start over Thursday morning.

U.S. skier Bill Demong was hit by a 2.8 meter-per-second gust in his second jump, which is outside the tolerance limit for the event. U.S. jump coach Lasse Ottesen immediately brought it to the attention of the judges and there was a 47-minute delay. The competition began again, but only a few skiers jumped before the International Ski Federation made the call to end it.

"I think it's a strange decision, but it sounds like the decision's been made," U.S. Nordic director Luke Bodensteiner said of restarting in the second round. "I don't know that there is a usual way. We've been scouring the FIS regulations and there's nothing that gives specific guidelines how to do it. The jury determined they have a chance to get one round in tomorrow and maybe not two, so they're letting the first round stand."

Demong and the six jumpers ahead of him who had already gone in the second round were sent back to the top because officials determined they had gone with a disadvantage because of the winds at the top.

"It's just turning circles up there," Demong said before heading back up the lift.

The Americans, who have never won a medal in Nordic combined, were going to take action if nothing had been done because of the dangerous conditions. Dimitry Mateev of Russia, the second competitor of the second round, tumbled after landing his jump.

"We were prepared to protest, but we didn't have to," U.S. Ski Team spokesman Tom Kelly said.

The skiers complete two jumps off the large hill, then move to the nearby cross country venue. Each competitor skis five kilometers in a relay format, with the leading team from the ski-jumping phase starting first in the cross country race.

After the first ruling, the Norwegians were thrilled, with a smiling cross country coach Trond Kattem saying: "We're very happy with the decision and we can still compete. After this news, they're much better."

Norway's special jumpers considered filling in, but the rules wouldn't permit it because they weren't previously registered. However, Nordic combined athletes can cross over and compete in the ski jumping events, according to FIS jumping spokesman Kurt Henauer.

Ola Morten Graesli has a bad cold and traveled to Pinerolo to be away from the rest of the team. Kristian Hammer has the stomach flu, while Magnus Moan and Petter Tande are suffering from sore throats.

The U.S. team is still hopeful of earning its first medal in the sport after several near misses in recent years, including a fourth-place finish at the 2002 Salt Lake City Olympics.

Lodwick, the top American competing in his fourth and final Olympics, was happy to have more time to get back to feeling like himself. He's still recovering after a bout with the stomach flu and a congested head.

"I didn't jump the way I wanted to," said Lodwick, eighth in Saturday's individual event. "I haven't had that really good feeling. ... This is not a break, but it's a blessing in disguise. We weren't prepared mentally the way we should have been."