SKI TRAVEL. Winter in Mayrhofen is a simply breathtaking time of the year for action lovers: not only the views of the majestic peaks of the surrounding three-thousanders, but also the prospect of rapid runs gets the blood pumping. Whether the legendary Harakiri or the Devil’s Run on the Penken, the demanding valley run on the Ahorn or the permanent race courses on the two Mayrhofen mountains – there’s no need for speed and adrenalin junkies to worry about getting bored. Freestylers can also get their kicks in the perfectly shaped Vans Penken Park. 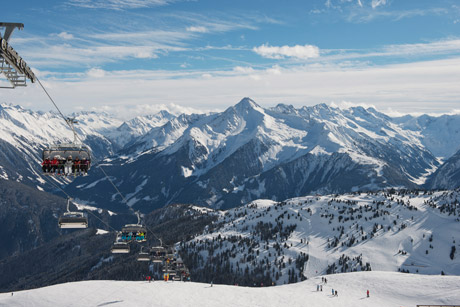 The five-star Mayrhofen ski resort in the rear Zillertal Valley is a hotspot for anyone looking for true diversity. Whether on a snowboard or on skis, innumerable demanding pistes and obstacles are just waiting to be mastered by skilled visitors.

STEEP, STEEPER, HARAKIRI
It has long-since been iconic and for many skiers is the highlight of their winter holiday: with an average gradient of 78 percent, the Harakiri run in the Horbergtal Valley is Austria’s steepest slope adventure and brings even experienced skiers and snowboarders out in a sweat. It is for this reason that the run, named ‘best black piste’ by skiresort.de in 2012, should only be attempted by absolute experts. 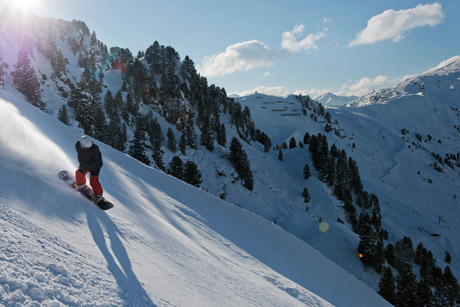 Every Friday from 13:00 to 15.00, a professional photo shoot takes place on the Harakiri for anyone who wants to record their achievement. The action shots can then be downloaded free of charge from the online shop, where you can also find the ‘I survived Harakiri’ t-shirt for anyone who has successfully mastered the piste. If you are not sure whether you are ready for the Harakiri, you should first try the slightly less extreme piste no. 17, the Devil’s Run. If you can get down that safely, you are ready for Austria’s steepest slope adventure.

SHREDDING IN THE XXL SNOW PARK
Somewhere else that is equally as legendary as the Harakiri is the Vans Penken Park, one of Europe’s best snow parks and one of the few XXL parks in Austria. The snow-covered playground uses six different areas to attract the international freestyle scene to the sunny side of the Penken. Whether a beginner or a pro, in the kids park or the fun park – everyone can find the perfect obstacles for jibbing and jumping. The park’s very own four-seater chair lift Sun-Jet takes freestyle acrobats straight to the six areas enabling them to enjoy multiple runs. The 10-strong shape crew continually develops the park and ensures perfectly shaped lines and obstacles every day, ranging from medium-difficulty kickers, boxes and rails to the 14-22 metre kicker.

RAPID DESCENTS AND ACTION-PACKED TOURS
High speeds are a must on the three permanently installed race courses, the Unterberg I, the Unterberg II and the Ahorn race course – all of which can be used free of charge and enable ambitious skiers and snowboarders to clock their best times through the gates. On the speed run on the Gerent, their speed is recorded free of charge. When it comes to sport though, the Leisure Mountain Ahorn has more than just a race course to offer: the demanding 5.5 kilometre valley run has what it takes and gets even experienced skiers’ adrenalin pumping. Furthermore, the Mayrhofen cable car company offers several tour options for those with an appetite for adventure, such as the fun + action tour, the altitude guzzler tour and the XXL tour. The weekly events programme ‘the perfect week’ offers a compilation of the most diverse experiences for every day. Anyone who wants to go home with more than just a memory can hire a helmet camera from the information desk at the valley station of the Lärchwald four-seater chair lift. On returning the camera, your recorded adventures will be burned onto a DVD for you to take home with you. Watching the film from the comfort of your sofa will certainly inspire you to organise further winter adventures in the Mayrhofen-Hippach holiday region.