ALPINE SKI. With win gusts up to 120 km/hr measured at the Pitztaler Weather Station, and forecast for worsening conditions later in the day, it was a quick decision for the Jury, who could assess that the conditions would be too dangerous for the athletes, but also for the spectators due to the temporary infrastructures in the finish area. The strong storm swept across much of central Europe, even causing fatalities in the Czech Republic and fallen trees all across much of Austria. 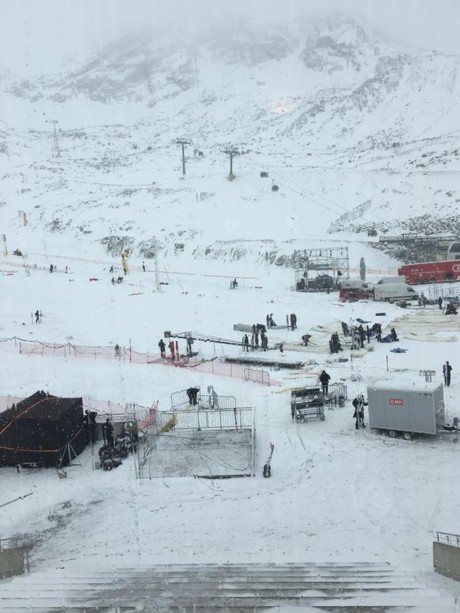 In fact by midday, the entire glacier area had to be evacuated due to the storm.

ôThe local authority, the organising committee and the race jury came together at 05h30 this morning to evaluate the situation on the glacier. At first, we decided to stand by and delay the final decision to 6h45. However, the situation didnĺt improve and according to the updated forecast, the wind gusts will get even stronger and the safety can no longer be guaranteed. Safety comes first, we had no other choice than to cancel,ö said FIS Chief Race Director Markus Waldner.

Officials had hoped the forecast would be incorrect after the great start enjoyed by the ladies' Audi FIS World Cup the previous day. An impressive seven different nations finished in the top seven spots in a memorably race that featured several lead changes and twists and turns. In the end, Germany's Viktoria Rebensburg found her way back at the very top of the podium, claiming the win in front of last season's ranking winner Tessa Worley from France and Italy's Manuela Moelgg who scored her 12th World Cup podium with age 34.

But today, despite the great efforts by the Soelden Organising Committee, Mother Nature proved to be too strong for the men to start their season. As per World Cup rule 18.1, the World Cup Opening races which have to be cancelled during the Opening are not rescheduled, so there will be one less giant slalom on the menĺs calendar 2017/18.

The World Cup Tour will go on in November, with a ladiesĺ and a menĺs slalom on 11th and 12th in Levi.