BIATHLON. ermany’s Arnd Peiffer shot clean and won the Gold medal in the snowy, windy men’s 20K Individual at the IBU World Championships in 52:42.4. Prior to today, the 2018 Olympic Sprint Gold medalist had never been on the podium, let alone won this longest and most grueling biathlon competition. Vladimir Iliev of Bulgaria, with one penalty won the Silver medal, his first-ever podium and IBU WCH medal, 1:08.7 back. Tarjei Boe of Norway, also with one penalty just missed catching the Bulgarian in the last loop won the Bronze medal, finishing .4 seconds behind his rival. 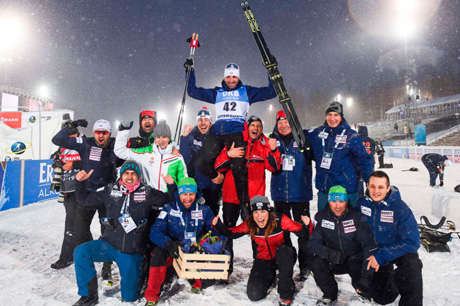 Completely Satisfied
Peiffer was thrilled with his performance that netted his second individual IBU World Championship Gold medal. He previously won Sprint Gold in 2011 at Khanty Mansiysk. “It is a big thing for me (to win) because I have never been on the podium in the individual. It is my first time to shoot clean in it. I am so happy to have a good shooting today. I am 31 years old and have been in many individuals; many times got to the last shooting and missed a shot. I am completely satisfied. l did my best and could not do better. I am really satisfied!” 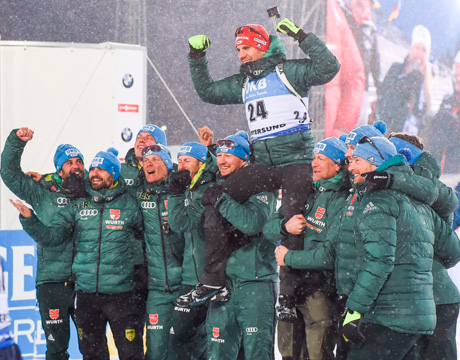 Speed and Luck
He admitted that the key to his success was balancing his speed on the tracks and “a bit of luck. “I tried to find a good speed in the first loops to not be too exhausted in the last shootings and to be able to push a good last lap. I think I found a good balance between pushing and a good speed…in standing I had not big wind gusts, it was not so easy in my first prone…in  a race like this you always need a bit of luck with the wind.”

Snow and Wind
The 103-man field lined up for their toughest test of the week with light blowing snow,-2C, and wind cutting across the shooting range from right to left and vice-versa; definitely challenging conditions. With fresh snow on the tracks, many of the top contenders started midway through the field, avoiding the first start group. Lukas Hofer took the early first stage lead, with Desthieux and Benedikt Doll just seconds back. The wind began gusting, causing Fourcade to shoot extremely slowly and pick up one-minute penalty. Johannes as usual led the field into prone, cleaned, leaving with the best time, 10 seconds ahead of Hofer. Peiffer also cleaned but was 18.8 seconds off Johannes’ top time.

Rastorgujevs and Peiffer on Top
The snow picked up as the first men came to the first standing stage. Samuelsson, perfect in prone was the first to do the same in standing, taking an early commanding lead. Peiffer cleaned next to drop Samuelsson back a spot. Fourcade went out of contention with another penalty. Johannes, although skiing well, missed his second and fourth shots, throwing him more 1:19 behind Peiffer. Rastorgujevs after a clean prone made his bid by adding five more perfect shots to drop Peiffer to second position.

Costly Penalty for Samuelsson
The Swedish hope clicked numerous times because of the tricky wind, missing a shot. Peiffer became the first of the contenders to go 15-for 15, cleaning the second prone stage, despite the wind; going up by 1:22That put him 1:22 up on the field. Iliev after missing a shot in prone cleaned to move in just behind the German. The Latvian continued with another perfect shooting bout; now 11 seconds ahead of the Olympic Sprint Champion. Iliev’s podium march continued with five more targets closed, putting him just seconds behind Peiffer. Vetle Sjaastad Christiansen, after two perfect shooting stages, added another, supplanting Iliev as the third fastest after three stages.

Peiffer’s Perfection
Peiffer’s perfect day continued when he closed the final five targets with ease, taking a solid lead.  Samuelsson moved into the second spot, with just single miss while also Hofer cleaned. Rastorgujevs missed his medal chance with two penalties. Iliev added one more 5-for-5 that moved him to second. Christiansen, the last man to have a podium chance closed the last five targets, leaving in the Bronze medal spot. However, just behind him Tarjei coming back after a second stage penalty also cleaned, leaving 8 seconds faster than his younger teammate.

Peiffer Wins; Iliev’s Last Loop
Samuelsson was the first of the contenders to finish, but Peiffer jumped more than 1:30 in front when he crossed the line just minutes later for his first-ever 20K win. Iliev continued his nearly perfect day with a strong last loop to move in front of the Samuelsson. The Bulgarian described his last loop. “I did not expect to be second. I gave everything I could in the last loop. This was maybe the hardest last loop in the last 20 races; maybe with the weather and snow, but I gave everything I could.” 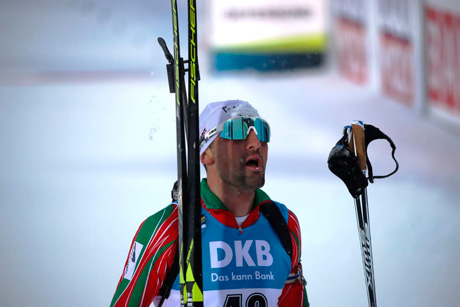 Tarjei Battles; Takes Bronze
Tarjei battled hard as the snow continued on the last loop, moving less than second in front of the Bulgarian with 1200 meters to go. With 400 meters to go, he was less than a second back, in third. Pushing hard in the last 100 meters was not enough; the Norwegian veteran finished third, with his first individual IBU WCH medal since winning five medals at Kontiolahti in 2015.

“(Bronze) Medal was Gold”
The Norwegian dug deep in the last loop, not wanting to be fourth again. “It was hard. I knew I had no chance to catch Arnd, then of course Iliev was in front of me…I took second by second and in the end, everything looked black…It does not matter. I was fourth in the pursuit. If I was fourth in this duel, I would not be happy at all but to be honest, a medal was Gold for me today.”