SKI CLASSICS. Birkebeinerrennet, the 10th event in Visma Ski Classics, was a day full of sunshine, a lot of smiles and two amazing breakaways. Petter Eliassen, Team BN Bank, broke away from the pack in the first climb and skied alone all the way to the finish. Justyna Kowalczyk, Team Trentino Robinson Trainer, had a similar tactic in mind, but her decisive attack took place in the second long hill up on the mountains. She remained in the lead and won the race. 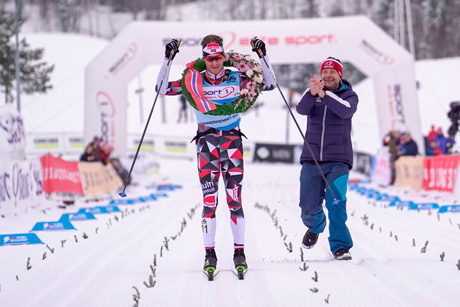 In the men’s 54 km race, Eliassen attacked very early on and only his teammate Morten Eide Pedersen was able to follow for a while. Before reaching the climb competition point at Raudfjellet, 20 km, Eliassen was skiing solo and kept going so strong that no one else had a chance to even try to catch him. Behind him, five men approached the stadium area, and the yellow bib holder Andreas Nygaard, Team Ragde Eiendom, proved again that he is the sprinter extraordinaire by taking home the second place. There was an extremely tight fight for the last podium place between Simen Østensen, Team BN Bank, and the Vasaloppet winner Tore Bjørseth Berdal, Team Koteng. The former managed to be third making the day perfect for Team BN Bank as their third skier Pedersen was also able to finish 5th. 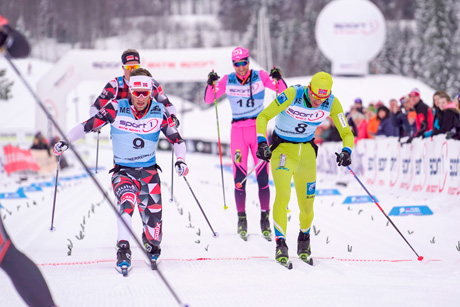 “This went according to our plan,” Eliassen admitted after the race. “This is a good race and great course for me. I attacked early on and managed to keep the gap. I just tried to focus on my own performance and make sure that I won’t encounter any unwanted mishaps on the way. It was a perfect day for our team, and I’m happy that my teammates did so well, too.” 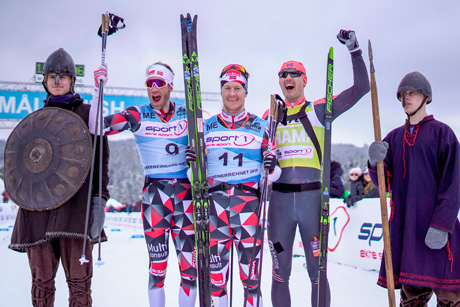 The women’s race had more action as the current Hertz Champion leader Britta Johansson Norgren struggled in the first hill while Kowalczyk, Astrid Øyre Slind and Masako Ishida, both from Team Koteng, worked together to gain a gap over their toughest rival. Kowalczyk broke away from the others in the second long climb and Johansson Norgren was able to catch both Ishida and Øyre Slind. Kowalczyk’s breakaway lasted until the finish while the Team Koteng skiers had to let Britta go. Øyre Slind was stronger than her teammate in the end and she finished third in the race.

“I didn’t expect this to happen,” the happy winner Kowalczyk stated wearing her victory garland. “I felt tired after 12 kilometers of skiing, but my skies were so fast. So, I decided to push harder and it worked. I told my coach in the morning that I didn’t feel that strong, but he said that I’m strong and I should just go. It means so much to have this hat trick, three consecutive wins, here at Birken, which is so important to all Norwegians. About my next race, I may do Ylläs-Levi in Finland.” 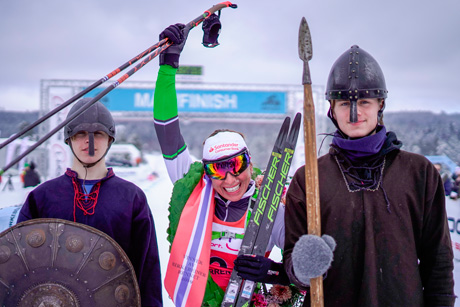 The next event in Visma Ski Classics Season IX is another challenging one in Norway, Reistadløpet on April 6. The season ends with Ylläs-Levi in Finland on April 13.