SKI CLASSICS. The ninth season of the Visma Ski Classics Pro Tour has just finished, and the tour has grown in scale since its inception in the late 2010. Back then in the first season 2010/11, there were less than 100 pro athletes registered for the tour and only a handful of pro teams ready to fight for glory in six events. 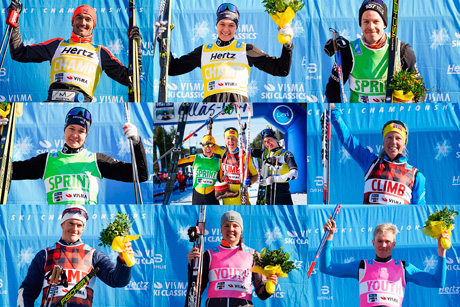 Ever since, the tour has steadily expanded, and for the 2014/15 season, a prologue race, pro team tempo, was introduced for the first time. That season also saw a record number of events in the calendar with 8 other races, in addition to the prologue, stepping into the arena of long distance skiing. The following year, the tour exceeded 10 events in the course of the season, and the total number of races has stayed beyond 10 ever since with the highest number of events, 13, in 2017/18.

The Visma Ski Classics Season IX proved to be the greatest success so far as the record number of pro teams, 32, from 10 different countries, entered the game, and there were more registered pro skiers than ever before, 276, of which 76 were women, fighting for points in 12 events. Notably, the amount of non-Scandinavian pro teams have increased over the years, and of the 10 participating nations six hailed from Central-Europe this season.

Interestingly, the number of participant nationalities has also grown, and this season we had pro skiers from 14 countries. The greatest number came from Norway, 108 of which 26 were women. Sweden and the Czech Republic were the next countries behind the land of the fjords with 43 (12 women) and 31 (11 women) registered skiers, respectively. France and Germany were not that far behind as the former had 20 skiers and the latter 17, of which four were female skiers equally from both countries.

There have been some changes in the Visma Ski Classics Ranking, scores acquired in a 24-month period, and the current leader in the men’s category is Andreas Nygaard, Team Ragde Eiendom, who also won the Hertz Champion title this season. The former champion Tord Asle Gjerdalen, also from the same team, is still second even if his season was not quite what he expected. Morten Eide Pedersen, Team BN Bank, is third. Three notable climbers in the top 10 are Øyvind Moen Feld, 5th, Team Ragde Eiendom, Tore Bjørseth Berdal, 6th, Team Koteng, and Anders Aukland, 7th, Team Ragde Eiendom.

In the women’s ranking battle, Britta Johansson Norgren, Lager 157 Ski Team, has the lead over Katerina Smutná, ED System Bauer Team, and Lina Korsgren, Team Ramudden. An exciting fight between Korsgren and Astrid Øyre Slind, Team Koteng, who is 4th, will resume next season. They both had a really good season and fought neck-and-neck with several podium places and some wins; Øyre Slind won both Reistadløpet and Ylläs-Levi while Korsgren was the fastest female skier in Jizerska 50.