. sport : Spectacular Tokyo Olympics 2020 closing ceremony marks the end of unprecedented games - 08 August 2021 - 16:40
The ceremony was a spectacular handover to the next Olympics host, Paris

OLYMPICS. The closing ceremony of the Tokyo Olympics featuring a spectacular flypast, BMX riders and breakdancers brought an end to an unprecedented and historic 16 days. At the Japan National Stadium, Tokyo handed over the Olympics baton to Paris following what was a hugely scaled-back Games in light of the pandemic. 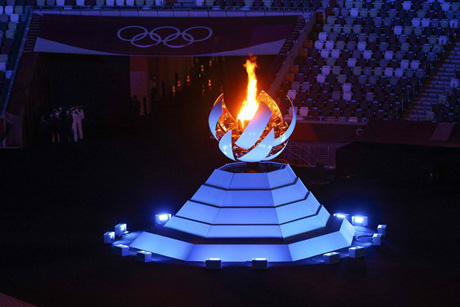 A view shows the Olympic Cauldron and the Olympic flame during the closing ceremony of the Tokyo 2020 Olympic Games, on August 8, 2021 at the Olympic Stadium in Tokyo. (Photo by Behrouz MEHRI / AFP) (Photo by BEHROUZ MEHRI/AFP via Getty Images)

The Paris 2024 Olympics is just three years away because of the delay to Tokyo 2020.

This closing ceremony theme was “Worlds We Share” and both Japan and Paris put on a stunning display. 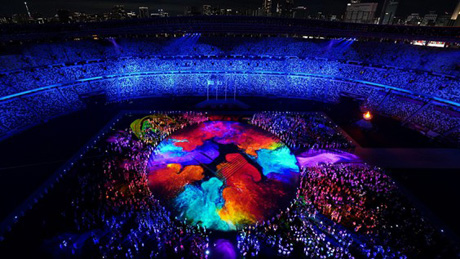 The ceremony began as the Japanese national flag was brought in by six flag bearers.

It was raised as the Japanese national anthem echoed around the national stadium and the flag bearers appeared. 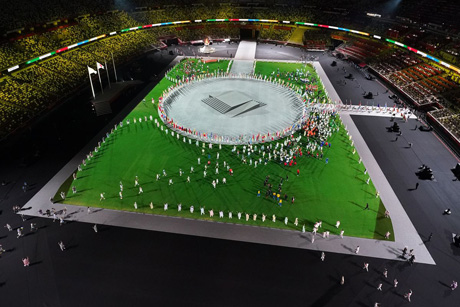 Athletes take part in the athletes' parade during the closing ceremony for the Tokyo Olympics.FABRIZIO BENSCH/Reuters

Cyclist Laura Kenny, who became Team GB’s most successful ever female Olympian during these Games, was chosen to be the flag bearer for Team GB. 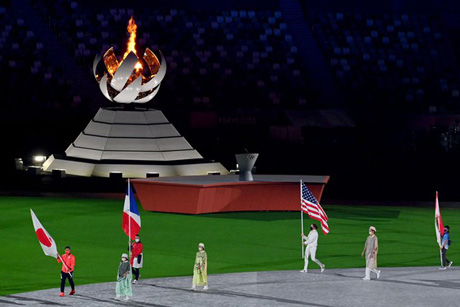 Breakdancing, ska music and dance displays livened up the ceremony, which was attended by Crown Prince Akishino. 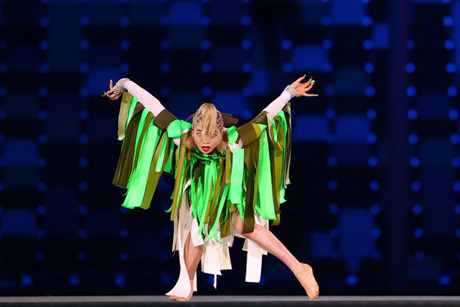 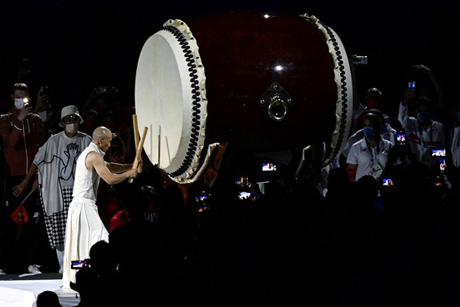 A musician performs during the closing ceremony of the Tokyo 2020 Olympic Games, at the Olympic Stadium, in Tokyo, on August 8, 2021. (Photo by Jewel SAMAD / AFP) (Photo by JEWEL SAMAD/AFP via Getty Images 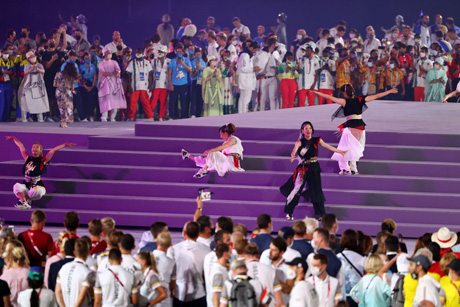 Performers take part in the closing ceremony of the Tokyo Olympic Games.HAMAD I MOHAMMED/AFP/Getty Images 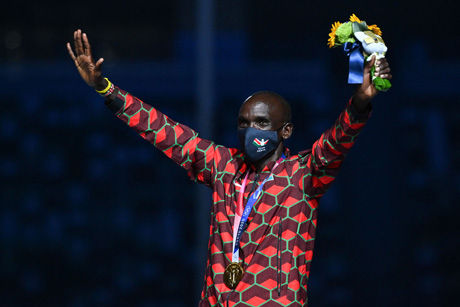 Then it was the turn of Paris.

The Marseillaise was performed remotely from several locations in Paris.

As well as BMX riding across Paris landmarks, there were live scenes of flag-waving fans in Paris celebrating the handover.

France’s president, Emmanuel Macron, appeared on screen to deliver the updated Olympic motto of “Faster, Higher, Stronger – Together” from the Eiffel Tower.

This was followed by a spectacular air display that painted the Paris sky the colours of the French flag as the flypast zoomed past the Eiffel Tower.

The colours of the French flag streamed across the sky in front of the Eiffel Tower (Photo: Reuters/Benoit Tessier)

With a return to the National Stadium, Tokyo 2020 President of the International Olympic Committee (IOC) Thomas Bach said: “In these difficult times you give the world the most precious of gifts: hope.

“For the first time since the pandemic began, the entire world came together. Sport returned to centre stage. Billions of people around the globe were united by emotion, sharing moments of joy and inspiration.

“This gives us hope. This gives us faith in the future”, Bach continued, referring to “Games of hope, solidarity and peace.” 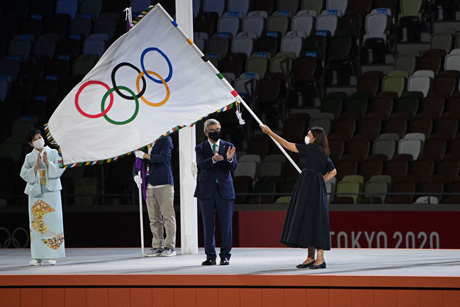 A musical number followed and the Olympic cauldron and flame, which had represented the sun during the games, closed to become the moon to the strains of Debussy’s Clair de Lune.

And with that, the Olympic flame was extinguished. 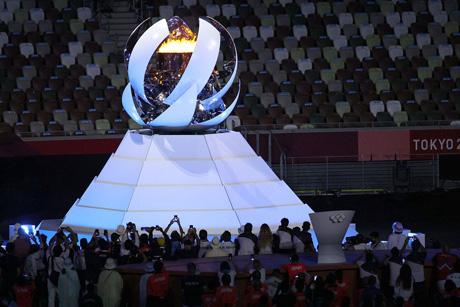 The olympic flame is extinguished during the closing ceremony of the Tokyo Olympic Games at Olympic Stadium.Leon Neal/AFP/Getty Images 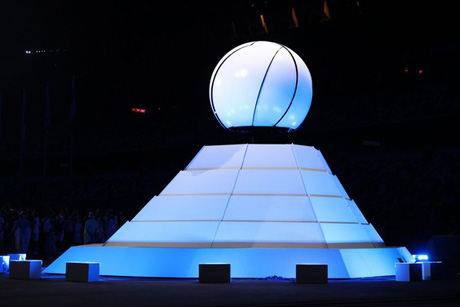 During the ceremony Tokyo 2020 president Seiko Hashimoto said: “The hope that has been ignited here will never be extinguished.”

She added of the Paralympic Games which begin on 24 August: “Our journey continues.” 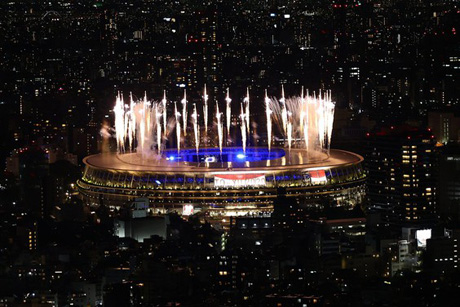 The Tokyo 2020 Olympics Closing Ceremony – Olympic Stadium, Tokyo, Japan – August 8, 2021. Fireworks are seen from outside the stadium during the closing ceremony from the Shibuya Sky observation deck REUTERS/Kim Kyung-Hoon 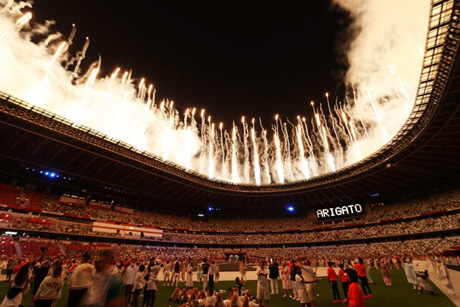 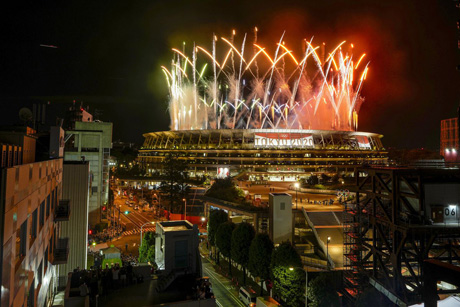 Fireworks illuminate over National Stadium during the closing ceremony of the Tokyo Olympics.Kiichiro Sato/The Associated Press