WAKEBOARDING. Timo Kapl was the surprise winner of Red Bull Wake Capital as the worldĺs best wakeboarders descended on Hamburg, Germany, to tackle a hugely challenging course in the shadow of the iconic Elbphilharmonie concert hall. Here is all you need to know: 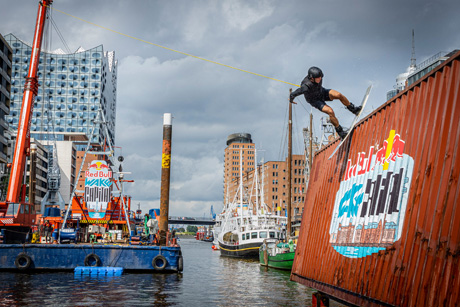 - Each of the world-class wakeboarders would attempt to impress the judges by performing a series of tricks and kicks along the 240-metre track, which featured nine obstacles.

- Austriaĺs Kapl would emerge victorious thanks to a memorable performance in his second Superfinals run that included a Backside 450 onto the drop-down rail right out of the gate.

- This was enough to earn 86.66 points from the judges and take first place ahead of the pre-event favourites, with Thailandĺs Daniel Grant (84.66) claiming second and American rider Guenther Oka (81.00) finishing in third.

- Kapl, 24, said: ôI gave it my all and put in the run of my life. Iĺm super happy to have won here. I had a very bad injury two years ago and didnĺt know if I could come back again ľ and now this.ö

- After finishing in second, Grant said: ôThe track here in Hamburg is totally unique. When I saw it for the first time, I was really overwhelmed by what kind of set-up was built here. We all had a lot of respect, but we were able to adjust well to the conditions during the two days of training and had a lot of fun today.ö