SKI JUMPING. Kamil Stoch won the final competition of the FIS Summer GP 2010. The Pole won in Klingenthal with a sensational jump on the hill record of 143.5 m in the second round with 1.3 points ahead of the Thomas Morgenstern, the leader after the first round. "This was my best summer so far. I can't promise that I will be that strong in winter, but I'll work hard for it", said Stoch. 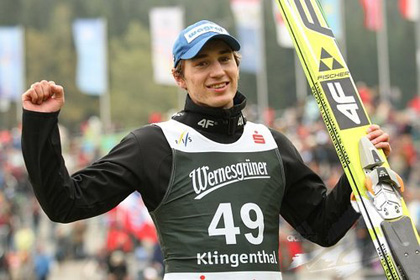 The third place went to Gregor Schlierenzauer, who moved up from ninth after the first jump. Stoch was fourth, but his outstanding jump and the changing conditions helped him to take the big step forward. It was his third victory this summer. He finished on the podium in all six competition he participated in this summer. Three victories, one second and two third places are an excellent result.

"It seems I have a subscription of second places this summer. I'm satisfied with this weekend. I showed some very good jumps and to me the competitions in summer are an important indicator for the winter", said Morgenstern. "I still believed in my chance after the first round. Especially in a competition under changing conditions everything is possible", told Schlierenzauer.

Under windy conditions Pascal Bodmer, third after the first round, finished only 30th. But still the German team can be satisfied with the competition. With Maximilian Mechler (6th) and Severin Freund (9th) two Germans reached the Top 10.

Daiki Ito is the overall winner of the FIS GP 2010. The Japanese, who is at home training of the upcoming winter, benefited from the disqualification of his main rival Adam Malysz. He started his first jump too late when the light was already red again. Very infuriating for the 33-year-old, although he would have had to improve his performance in the final round to catch up with Ito. But the disqualification decided the result in favor of Ito, who won the Summer GP for the first time in his career.

After Takanobu Okabe and Masahiko Harada, Ito is the third athlete of the "Air Nippon" to win the title as the best jumper of the summer. Harada was the last Japanese to win in 1998. Ito ended this 12 year long barren spell.

Malysz-disqualification main topic of the day

The dominating topic of the day was of course the disqualification of Malysz. The jury looked at the tape of the start over and over again but it always led to the same decision: Malysz started when the light has already turned red again. The only possible measure was the disqualification of the Pole who was waiting for better conditions for too long. 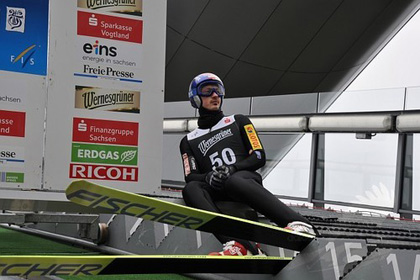 Malysz: Waited a moment too long

Malysz did not blame anybody. He said after jump that he waited for the coache's signal due to the wind. At the end he waited a moment too long. With his victory today Stoch is now second in the FIS GP overall ranking and Malysz third.

The Austrians achieved a top result on one of their favorite hills. Besides Morgenstern and Schlierenzauer, also David Zauner (5th) and Wolfgang Loitzl (10th) landed in the Top 10. Johan Remen Evensen was best Norwegian as fourth, Rune Velta surprised as seventh and raises hopes for new ski jumping star in the team of Mika Kojonkoski.

Grigoli surprises - Kubacki brought back down to earth

Finland's Matti Hautamaeki finished eighth. Vincent Descombes Sevoie from France again showed a good performance and with Marco Grigoli a young Swiss is on his way to follow in the footsteps of Andreas Kuettel and Simon Ammann. The 19-year-old from St. Moritz was 25th in Liberec and achieved the best result of his career today as 18th.

The form curve of Dawid Kubacki, the shootingstar of the summer, is pointing downwards towards the end of the FIS GP. The 20-year-old Pole was only 29th in Klingenthal.

Surprisingly Tom Hilde, second in Liberec, Kalle Keituri, Bjoern Einar Romoeren, Martin Schmitt and Borek Sedlak could not qualify for the final round.

Schlierenzauer right back to the top

The Austrians will take part at the final of this year's FIS GP in Klingenthal with all their stars and they are challenging the Polish team that dominated this summer. Gregor Schlierenzauer won the qualification on his favorite hill with a great jump on 140 m, that earned him 138.0 points.

The second place in the "Vogtland-Arena" went to Johan Remen Evensen, who was fourth in Liberec yesterday. The Norwegian got 134.2 points. Michael Neumayer (124.4 points) was third, a very good performance considering the fact that Neumayer focuses more on his studies in summer.

Other athletes who didn't take part in Liberec finished fourth, fifth and sixth. Austrian Andreas Kofler and the two Germans Pascal Bodmer and Michael Uhrmann. So three Germans were among the best six in front of their home crowd. On the other side Richard Freitag, Danny Queck and Tobias Bogner could not qualify.

The favorite for winning the overall title of the FIS GP, Poland's Adam Malysz, showed the longest jump of the pre-qualified athletes with 139.5 m. Thomas Morgenstern jumped 136.5 m and was the only one who could keep up with Malysz. The form Dawid Kubacki, fourth in the Summer GP, seems to be not that good anymore. His fellow countryman Kamil Stoch is still one of the favorites. He jumped 134.5 m.

Andreas Kuettel proved the upwards tendency of his form after the good competition in Liberec and finished eighth, right behind Finland's Matti Hautamaeki. Rok Zima (9th) from Slovenia and the strong French Vincent Descombes Sevoie (10th) completed the Top 10. Andrea Morassi set the highlight for the Italian team as 11th, Maximilian Mechler was 12th and showed that his tenth place in Liberec was not a one-day wonder.

The win the FIS GP 2010 Malysz needs a podium finish. In spite of his cold, from which he is suffering for almost a week, this seems possible in his current shape. The overall leader Daiki Ito is training in Japan and can stand on the sidelines.

Robert Kranjec returned home after the competition in Liberec because of a death in the family.

Even a sick Malysz can't be stopped

Even a sick Adam Malysz was unstoppable in Liberec. The Pole, who is on medication for a couple of days, won the Summer GP competition with jumps of 126.5 m and 127.5 m (273.1 points) ahead of strong Norwegian Tom Hilde (263.5 points) and his fellow countryman Kamil Stoch (259.8 points). 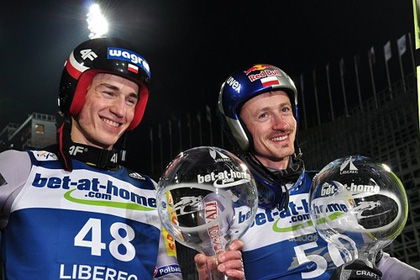 In spite the success, Malysz's coach Hannu Lepistoe is worried because has a chronic cold and so far the doctors couldn't make a real diagnosis. But even with fever the Polish icon is on track for his fourth overall victory of the FIS Summer GP. Before the final competition in Klingenthal on Sunday (qualification on Saturday at 7:00 pm CET, live on FISskijumping) he is 50 points behind the leader Daiki Ito from Japan, who is not competing at the moment. This means: If Malysz finishes on the podium in Klingenthal he is this summer's winner.

Malysz headed back to the hotel right after the competition to recover for the final. "I don't feel very well, but it's already better. My jumps are smooth at the moment. Klingenthal is important for me because I have the chance to overtake Ito there. I plan to jump in all training rounds, but we'll see. I'm optimistic", said the winner.

"It's a surprise that we had three athletes in the Top 10 under tailwind conditions. Usually we are not so strong with tailwind. Adam is almost unbeatable at the moment. We wait until he is healthy again and then we will attack", said second placed Tom Hilde. "Unfortunately we can't plan to support Adam to win the GP. But Adam is so good, he can win without our help", told Malysz's teammate Kamil Stoch.

Dawid Kubacki is out of the race for the overall title of the FIS GP. The young Pole showed a good jump in the first round, but he couldn't pass the equipment check - his skis were too long. Bad news for the 20-year-old shootingstar of the summer. Also Stoch can not catch up with Ito anymore. So the motto for Klingenthal is: Malysz vs. Ito.

During the first round of the high-class competition the tail wind increased at the hill and the jury reacted and moved the inrun four gates up. But still there were no very long jumps. Also in the final the competition was more characterized by the excitement than extremely long jumps.

Once again Severin Freund set the highlight for the German team. The Bavarian, who makes his coaches happy already the whole summer, was fifth. Maximilian Mechler could finally show his potential again and gained some self-confidence for Klingenthal with his tenth place.

Jernej Damjan from Slovenia showed some improvement and scored his first points of the summer as 16th. All in all it was a good day for the Slovenian team. Peter Prevc was ninth, Rok Zima 12th and Robert Kranjec 20th.

Also World Champion Andreas Kuettel, who celebrated his biggest success on this hill about one and a half years ago when he won the title, achieved a good result as 15th. Rafal Sliz from Poland as 11th and French Vincent Descombes Sevoie as 13th also left positive impressions.

Harri Olli, who says he doesn't have any goals for the upcoming winter, and Anders Bardal, were among them who could not qualify for the final round.

Final comparison before the new season

With the two competitions in Liberec and Klingenthal the FIS Summer Grand Prix reaches its final phase. For the athletes this is the last chance to compare their form with the competition before the crucial phase of the preparation begins and the jumping on snow starts.

But the Austrian stars (except Thomas Morgenstern) and last season's dominator Simon Ammann will not come to Liberec. Gregor Schlierenzauer, Andreas Kofler, Wolfgang Loitzl and David Zauner will go directly to Klingenthal on Wednesday for two additional days of training before the competition. Ammann trains for the new season at home.

So for the Austrians, only Thomas Morgenstern will try to rain on the parade of the Polish team. They are the top favorites in Liberec because also Japanese Daiki Ito, overall leader of the FIS GP, will not take the trip to the Czech Republic and Germany. Ito will stay in Japan to focus on the preparation for the upcoming season.

This means Adam Malysz still has chances to achieve his fourth overall victory. The Pole is already the record holder with three overall titles. But he is 150 points behind Ito so he needs two great competitions.

And the veteran has to fight with the competition within his own team. Kamil Stoch is in the shape of his life and will be difficult to beat. But for Malysz two second places with 80 points would be enough to beat Ito. Also Dawid Kubacki and Stoch, 185 and 190 points behind, can still go to the top of the overall ranking.

It will be interesting to see if the Polish jumpers help their "oldie" to win the overall title or if everyone of the strong Poles is fighting for himself. The team of head coach Lukasz Kruczek already won the Nation's Cup.

The German jumpers want to show what they are capable of at the FIS GP final in Klingenthal on Sunday. They will definitely take part with their best team.