ALPINE SKI WORLD CUP. He`s climbed onto the top step of the podium on the World Cup tour 27 times and throughout his career he has collected a total of five (1 gold, 3 silver and 1 bronze) medals stamped with World Ski Championship or Olympic logos. “He” is Switzerland’s Didier Cuche - a ski racing legend, who just added another little globe to his previous three downhill trophies, making him the the second-best skier of all times behind Franz Klammer, who is on top of the leaderboard with five victories. 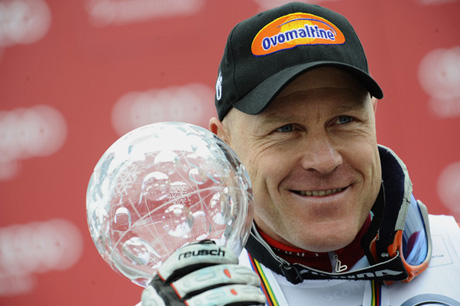 But the 36-year-old Cuche, who announced the continuation of his career on Tuesday is primed to pad his victory chest with more precious metals. Having been asked about the key factors for his success over all these year and his seemingly growing strength at an age when others have quit long ago, Cuche had interesting things to say…..

Sandra Kuehni: Didier, you decided to continue racing for another season –who supported and influenced you in your decision?

Didier Cuche: I am still very passionate about skiing and this is the world where I feel at home. I am still healthy and going strong. Over the last few years, I had consistently good results so the decision was my own.

SK: Did past injuries and back problems play into your decision?

DC: It is true I had some problems with my back in Val d’ Isère in December but the recovery went into the right direction and the MRI proved that my back got better since then. It is crucial for me to have a strong torso, which includes the abdominal and back muscles. It is like brushing your teeth, you need to train your torso on a daily basis and build up your muscles in summer while maintaining them in winter. My training program is especially laid out for me. For example, I chose to do exercises and activities that limit the strain on my back. Together with my conditioning coach, we have a lot of experience.

SK: Do you have to do more to stay on the same level as in previous years? Are you at a disadvantage there compared to your younger competitors?

DC: It is quite the opposite. Over the years I learned what I need to get me where I want to be. I know what is important in the technical training on snow but also in the dryland training. It helps that I have had the same dryland conditioning coach for the past ten years. That really makes things much easier. You don’t need to try and find the best solution because you already know what works best. This allows you to focus on quality instead of quantity and limits the impact on your body and joints.

SK: What did you learn to do differently over the years?

DC: The recent incident in Kvitfjell where I was fined for voicing my opinion showed me again that I need to hold back sometimes and rather direct my energy in the right direction. It is not good to get too worked up about certain things. In that sense, the past week taught me some important lesson in life even though it was definitely emotionally intense. There have been similar situations in the past ten or so years, in which I wasted my energy instead of focusing on the race. Had I learned this earlier, I think I could have skied more consistently on a higher level also in earlier years. Skiing really teaches me new things every day.

SK: You will have a new head coach – Osi Inglin - next year. How are you dealing with that change ?

DC:I know Osi from before when he was a coach with Swiss Ski. In 2002 I had a great season with 8 podium finishes including two victories and got third in the overall standings. From every person you can learn something new and focus on whatever is right for you. But of course I will miss Martin Rufener as a person and coach. He knows how to deal with different and difficult personalities and exuberates a calmness that carries over to the whole team. This is important in times when things go well but also and maybe even more so in difficult times.