As a recent gala evening confirmed, Lindsey Vonn is an inspiration - both on and off the ski slope. At a ceremony in the Bernese Oberland, the 26-year old Rolex Testimonee became the first woman to be honoured with the Herbert-Preis Award. This prestigious title celebrates an individual who has greatly promoted the Alps through their work in the media. 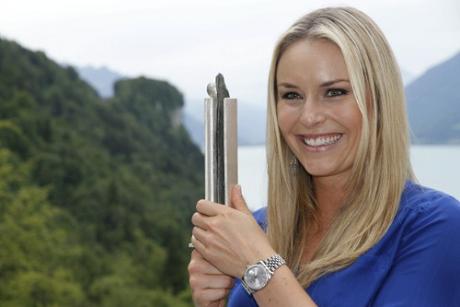 U.S. skier Lindsey Vonn receives "Preis Herbert" for her work in promoting the Alps and the sport of alpine skiing. Lindsey is the first female, first non-European and the youngest person ever to receive this award. Photo © Beat Kohler / Red Bull

The ceremony took place at the Hotel Giessbach, perched high above the inviting waters of Lake Brienz. The strikingly glamorous Vonn, the youngest ever recipient of the award, was undoubtedly the star attraction. "I love high heels and long gowns," the American revealed. Her presence certainly charmed Bernhard Russi, the first winner of the coveted prize 11 years ago. Russi described Vonn as a woman who could flirt with snow - at the same time joking that he would like to be reborn as a snow flake.

There were no problems in communication as Vonn speaks fluent German. Or, to be precise, perfect Austrian-German. Austria has become her second home now that she and her husband Thomas, who doubles as her coach, spend more than half of each year in the country. This includes much of the spring season. Vonn arrived at the gala fresh from an intense fitness work-out in Innsbruck and such is her commitment to her sport, she headed straight back for another strenuous off-season session.

Soon after the ceremony, Vonn's spell in Austria came to an end and on route back to the United States, she elected to take a detour through London, and more specifically, Wimbledon. "I'm a big tennis fan and really admire Roger Federer," she enthused.

Vonn has no summer vacation planned and there is certainly a bit less stress and pressure on her shoulders than in the winter months. It is during the summer that she and her husband are able to relax. In the winter the couple adopt more of an athlete/coach relationship. "It can sometimes cause a few difficulties when you're married to your coach," admitted the Olympic gold medallist. She does not call her husband "Thomas" or "Tom" but rather quite simply "Vonn!". However, having her husband/coach in attendance all of the time is not a problem for Lindsey and, as she points out, it has one distinct advantage, as she joked: "I never get homesick."

Vonn's preparations for next winter's campaign continue throughout the summer. She is fully motivated and ready to roll. "My strength and endurance levels are better than a year ago," she added. Her rivals should take note.

Rolex and skiing - a story of passion dating back to 1968, when French skier Jean-Claude Killy became a Rolex Testimonee after his triple medal win at the Olympic Games. The association that developed between the brand and this exceptional athlete has gone from strength to strength.

For a long time, the Olympic medallist was the only - but so emblematic - link between the brand and skiing, embodying, through his enthusiastic hard work and ceaseless quest for perfection, cardinal values that are also those of Rolex. Now, another legend in alpine skiing, Austrian Hermann Maier, has taken up the torch. A Testimonee since 2007 with an impressive number of victories to his name, he is also a champion who perfectly exemplifies the spirit of Rolex.

Determination, precision and perseverance - qualities that, for Rolex, constitute fundamental principles and which are essential for a top skier. The links between the brand and skiing are not due to chance. By its association with this elite sport, whose ideals it shares, Rolex asserts its attachment to a philosophy in which performance means excellence. It is not surprising, therefore, that the brand supports the most widely known leg of the Alpine Skiing World Cup: the Hahnenkamm Races in Kitzbühel, Austria. Captivated by this event marking the high point of the ski season, Rolex became its Official Timekeeper in 2007. More than a sponsor, Rolex is a true partner, contributing year after year to the prestige of the competition.

Since 2010, three new rising stars in alpine skiing - Switzerland's Lara Gut and Carlo Janka together with American Lindsey Vonn - perpetuate in turn the relationship that began in 1968 between Rolex and skiing. The brand, which has chosen them as Testimonees, is with them at every turn as they collect honours in races around the world. More than ever, Rolex celebrates skiing and the sport's greatest talents.